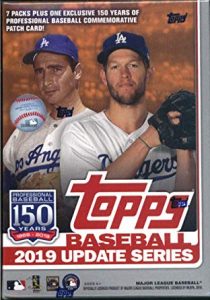 This is the third and final part of the 2019 Topps flagship set. Between Series 1, Series 2 and the Update set there are about 1,000 cards. This set contains players that were traded during the year and free-agent signings if they were not in their new uniforms in Series 1 or 2. It also contains Rookies who made their debut around midseason. In addition, there are two All-Star game subsets. This set used to be called Topps Traded and had 330 cards in a factory set. In recent years the set has been reduced to 300 cards and only released in wax packs. Sets need to be hand collated. The Parallels are the same as the first two series.

Starting with this Update Series, silver packs will now be inserted directly into hobby boxes and will no longer arrive loose

Some of the key cards:

Some cards also available in: