There are five minor league teams located in Iowa but there has never been a regular season major league game played in the state. This will all change next year. MLB has announced the Field of Dreams game will take place on Thursday, August 13, 2020. Field of Dreams was added to the National Film Registry in 2017.

The Chicago White Sox and the New York Yankees will be the participating teams. The Chisox will be the home team. This event will take place in Dyersville which has a population of 4,000. There will be an off day on Friday in the case of rain. The three game series will continue in Chicago on August 15. 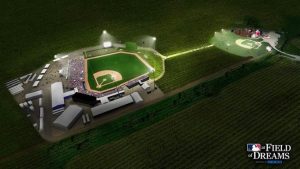 A new stadium with a capacity of 8,000  is being built next to the field from the 1989 Kevin Costner movie. I guess it is true that “If you build it, they will come”? The movie site was originally owned by Lansing Family Farms. MLB has stated that the design of the park will pay homage to Chicago’s Comiskey Park, which was the home of the White Sox from 1910-1990. The shape of the outfield and the bullpens in center field will mimic the old stadium. This is a nice touch since Comiskey was the home of the 1919 Black Sox that were featured in the film. There will be a short walk through the corn field to get to the game. There will also be windows in the right field wall that shows views of the surrounding cornfields. The dimensions of the outfield have not been announced but the center field wall from the movie was only 300 feet away. This is not designed to be a temporary ball field. The company, (Go The Distance Baseball) that purchased the movie site said that they will plan other events at the location.

The game will be an exclusive for Fox. It will be televised at 7 PM ET. The closest airport is Dubuque Regional Airport which has American Airlines flights from Chicago. This airport is 30 miles away.

The commissioner of MLB, Robert Manfred, said: “We look forward to celebrating the movie’s enduring message of how baseball brings people together at this special cornfield in Iowa”.

In 2020, there will also be neutral site games in Puerto Rico, London and the annual Little League Classic at BB&T Ballpark in Williamsport, PA. Some may think that only having 8,000 seats for the Field of Dreams game will be a tuff ticket but the seating at Williamsport is only 2,366. MLB has added numerous games like this in recent years. These have included a game at Fort Bragg in 2016 and the College World Series in 2019. These were the first regular season MLB games ever in the states of North Carolina and Nebraska.

MLB has not yet released details about tickets to the Field of Dream game.