This is the flagship Topps set that they have been putting out since the early 1950’s. While you can buy the compete set later in the year; this set is popular among those that like to put their own complete set together. It is also well liked by those who love the inserts that are not included in the complete base set. The photographs on the cards are fantastic. They are Stadium Club worthy. One thing that I don’t like is that the name is on either the left or right side. I think it is easier to read when it is at the bottom. There seems to be a plethora of landscape cards. I have never been a fan of these. The gold cards don’t look appealing. They look more brown than gold. The cards have a border on just one side. The backs are clean and I’ve always liked the way Topps lists the complete career stats.

Hobby Box should have:

Each Hobby Box will include a silver pack inside.

Jumbo Hobby Box should have:

Each box will include two silver packs

Silver packs have 4 1985 Topps Chrome cards. It is possible to get an autographed one.

Turkey Red (100) & Turkey Red Chrome – Retail packs have 1 per regular and blaster pack, 2 per fat pack and 4 per hanger.

There are special inserts that are only available at certain locations. These include:

Rainbow foil is 1 per 10 packs in a Hobby Box

These include SP and SSP. The SP is more common. The SPs use code 284 and the SSP uses 285. There are also a number of rarer cards that have code 578. An example of this is the Aaron Judge card that has Babe Ruth in the stands. 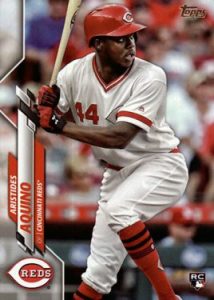 The 2020 Topps All Star Rookie Team