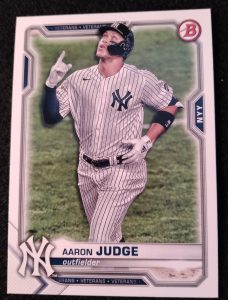 Today we are going to take a look at the Yankees that are included in the 2021 Bowman Base set. We will only talk about the 100 Veterans/Rookies and the 150 prospects. We will not discuss any inserts or hits such as autographs.

There are five Yankees among the first 100 cards. This is about average because there should be about 3.33 cards for each of the MLB teams. I thought maybe the Dodgers might have more but they only have three. The Padres have six so I would guess that is probably the most.

The Yankees have two Rookies which are Deivi Garcia and Clark Schmidt. Neither is among this year’s most desired Rookies. Obviously the other three are veterans. These include Aaron Judge who is sort of the face of the Yankees today. Gerrit Cole is also included. He of course was their most recent massive free agent signing. The last card could be considered a controversial pick. Neither Last year’s Batting Champion nor Home Run Leader were included. Gleyber Torres was the final pick. Some might also think that Aroldis Chapman or the often injured Giancarlo Stanton might have been a better choice. Perhaps, they just lean toward the younger players? (Looking back at 2020, only Judge and Torres were included. However, Garcia and Schmidt were among last year’s prospects).

There are six potential Baby Bombers among the prospects. These include Jasson Dominguez-OF, Austin Wells-C, Oswald Peraza-SS, Antonio Gomez-C, Anthony Volpe-SS and Kevin Alcantara-OF. These are the First Bowman’s for Gomez and Alcantara with the latter possibly being the most desirable at this time. Of course many people want to add Dominguez to their collection but he has already had Bowman cards so the current one is not as preferable.

It is important to mention that there are two different base sets of Prospects in the 2021 Bowman. The first set is considered the ‘Paper’ set. The other is the Chrome set. The Chrome set usually has much more collector interest.

It should be noted that a player such as Estevan Florial would not be included among the prospects because he has already had a cup of coffee last year. Albeit, he only appeared in one game in 2020. He has a Rookie Card in 2021 Topps Series 2, card # 406. 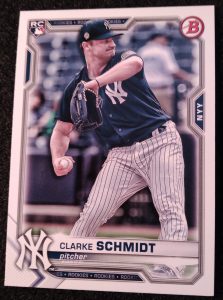 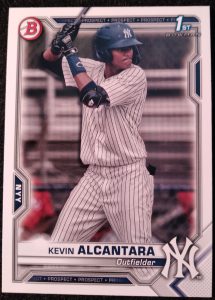 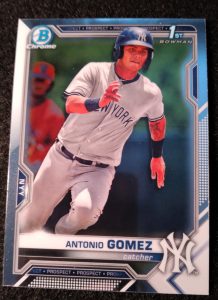 The card #s for the Chrome are the same for the Paper prospects except they start with ‘BCP’.