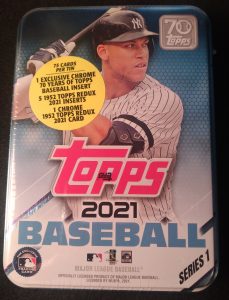 The 2021 Topps Series 1 Baseball Collectible Tin is a follow up to 2020’s initial collectible tin release. Last year they only had them for Series 1 and I’m unsure if it will be the same this year. There are six different ones and there are 75 cards inside. On average there will be nine inserts including 5 1952 Topps Redux, 1 Chrome 1952 Topps Redux and also 1 Exclusive Chrome 70 Years of Topps.

The cards are packaged similar to a Hanger Box having a large single pack of cards with the inserts in the middle.

These are available at many places but at different price points. On the Topps website they sold for $25 for a random one. There was a limit and they sold out pretty quickly. They usually cost less on Ebay for a random tin. In some locations (for example a card show) a specific tin might cost a bit more. Some online dealers at times have them for $20 or less but this could be just because they want to raise money for new product. These cost more than last year when they were closer to $15. With the high demand for cards this year it might be a good thing to have Topps earn more rather than just to enrich the flippers.

I personally like this product but only to pick up a couple of my favorite stars or to give as gifts. This year you are really paying extra for the tin. If you are trying to put a set together then two fat packs would give you more cards for a lower price. However, that exclusive Chrome 70 years of Topps card is really nice.

The six players depicted on the tins are: